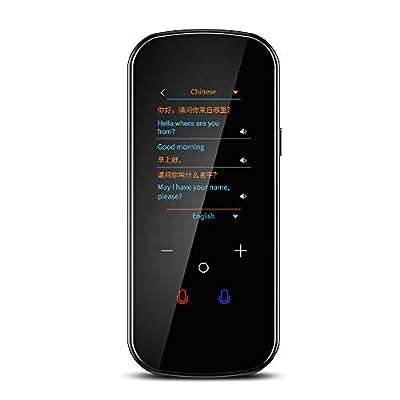 ?INSTANT VOICE TRANSLATION?–Simultaneous 2-way translation in multiple foreign languages. TESIYI translator covers 85% of the world's population.supports 227 countries languages ?include local languages? ?Offline Translator?–Tesiyi translator device support 8 languages offline translation, which means our translation activities will not be limited by the network environment, more convenient and practical.Without any trouble when traveling abroad or dealing with foreigners. ?Camera Translation?–Translate text from photos into English, Chinese, French, German, Italian, Polish, Portuguese, Russian, Spanish, Turkish, Ukrainian and others. (Support up to 44 languages), ?Real Time Voice And Text Translation? –With 2.4inch High-definition touch screen,when it translates your voice by audio,at the same time it translates into text on the display.And noise-reducing mic is able to recognize your voice in noisy environments, the speaker voice of this translator device is loud and clear. And if the others doesn't hear it clearly, you can click the screen to replay audio, suitable face to face translation and call translation. ?RECORDING TRANSLATION?–Recording function that can help you record every important meeting. Audio recordings in English can be translated into other various languages of your choice. When the system language is Chinese, it also has the function of AI, which can talk to you intelligently.

Creation Of The Humanoids - Green Screen...