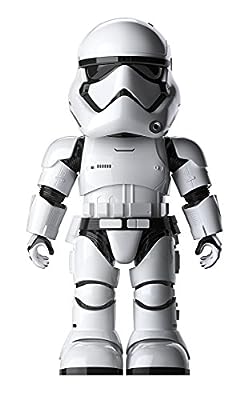 Companion App with Augmented Reality: Protect the First Order against the Resistance in your own room, issuing direct verbal orders, and launch attacks via the app interface in first and third person views for immersive interactive app play. Voice Command: Issue orders directly to your First Order Stormtrooper Robot to carry out your bidding. Facial Recognition: Create a database of up to three faces using the facial biometrics feature for customized interactions. Sentry Patrolling: Order your First Order Stormtrooper Robot to patrol a designated area of your home. Secure Wifi Connectivity via the iOS and Android compatible App Device Compatibility: Apple iOS 11 - iPhone 6s and up, iPad Air 2 and up, iPad Mini 4 and up, Android Marshmallow 6.0 and up, Minimum device memory requirement is 2GB of RAM