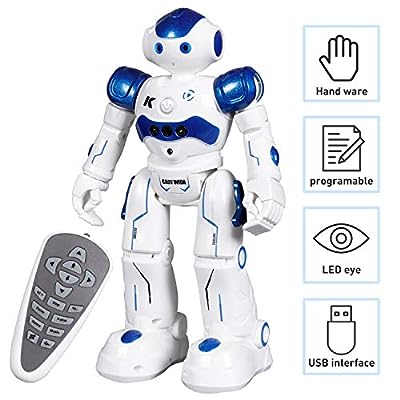 Gesture sensing?The SGILE remote control robot toy has a gesture sensing function, the sensor receiver zone on the chest can respond quickly after receiving various gesture commands and move forward, backward, left and right accordingly. Programming?The programmable kids robot toy has a One-button Programming function that can demonstrate a set of actions that the child enters through the remote control, and can input up to 50 motion commands so that kids can play their own imagination in play. Patrol?After the patrol function is activated, the fun robot toy will move freely to observe. With its built-in sensor, the intelligent robot can detect and avoid obstacles encountered to avoid potential collisions. Sing & Dance?The SGILE Robot toy has a pair of bright LED eyes, which can not only walk, slide but also have the function of singing and dancing. Dynamic music and dance will bring more fun to children. Battery & Warranty?The robot can play for 60 minutes after charging for about 120 minutes! And you can easily charge it using the USB cable that comes with the robot. At the same time, SGILE provide 7*24 100% satisfaction service if the toy robot got damaged.