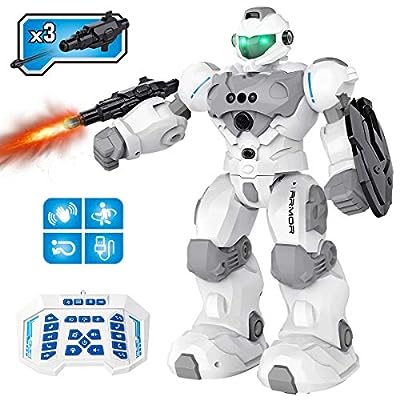 ?Guardian Smart Robot?The smart robot has a variety of functions, attacking the enemy, defense, programming, popular science, etc. Not only can kids attack enemies and fight to protect the planet like robot aliens in science fiction movies, but they can learn scientific knowledge from robots. ?Combat Fighting Mode? Press the button of the attack arrow, RC robot toy would perform the launch function, lock the target, and launch sucker bullets. And also, when your guardian fighter is attacked, take up the shield in your hand and resist the enemy's attack. ?Interactive Robot?Remote control robot toy is the best robot partner for kids, which can offer funny interaction by dancing, singing, talking, sliding, etc. Teaching concepts in robotics, science, art, and technology to kids, so helps to develop kids' creativity and imagination ability during playing. ?Remote Control & Gesture Sensing? Intelligent Robot not only can be controlled by the infrared controller, but can move forward, backward, left, and right according to your gesture commands. Robot toy has a Programming function, up to 50 motion commands, and has a patrol function that can detect and avoid obstacles to avoid potential collisions. ?Rechargeable Robot Toy?The smart robot charges by USB and using Li-on batteries. 1-hour playtime after charging for 60 minutes. You can easily charge it using a USB cable. This RC robot will become the best partner for your kids. Give your kids a big surprise!