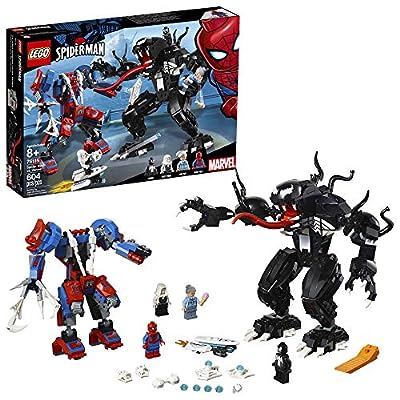 Kids can go on an adventure as they build the posable toy mech Spider-Man model, featuring a tech spider/web shooter and gripping toy claw, They can battle to save Aunt May from the claws of Venom’s mighty posable toy mech This superhero playset for kids includes 4 Spider-Man minifigures such as a Ghost Spider and Venom minifigure, Plus, this Spider-Man toy comes with a hover board, stud shooters and assorted web elements to customize builds, minifigures & toy weapons Kids will spend hours with this battle toy, fighting against the posable Venom figure, Plus, both mech toys feature a minifigure cockpit to place kids' favorite Spider-Man characters in, This Marvel toy is perfect for boys and girls aged 8+ This LEGO Marvel Spider Mech vs. Venom set can be built together with all other original LEGO building sets and LEGO building bricks. Kids can recreate adventures from the comics or create their own story for hours of imaginative play. This 604-piece Spider-Man vs Venom set includes a Spider-Man mech figure that measures over 5 inches (14 cm) high, 4 inches (11cm) long and 1 inches (4cm) wide; Venom’s mech figure measures over 8 inches (22cm) high, 7 inches (18cm) long and 3 inches (8cm) wide