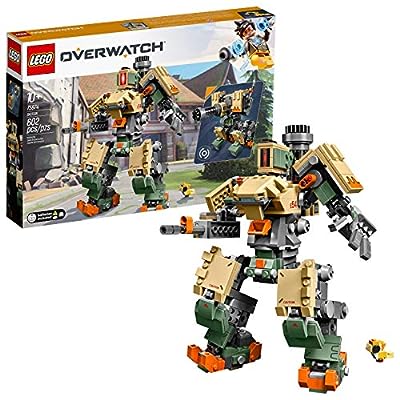 Build a collectible and realistic LEGO version of the Overwatch Bastion posable action figure that can be reconfigured from recon tank mode to sentry mode—no re-assembly required. This creative play toy robot model set of Overwatch defense hero Bastion features realistic details seen in the game and in animated videos including his friendly bird companion Ganymede. It’s a great collectible for any Overwatch fan Bastion building robot toy in recon mode stands over 10” (26cm) tall and in sentry mode stands over 6” (17cm) tall; 602 pieces – For boys and girls aged 10+ and fans and big kids of all ages LEGO Overwatch building characters and toys make the perfect gifts for fans of the game and are ideal Overwatch gaming collectibles The LEGO Overwatch Bastion building action figure can be assembled together with all other original LEGO sets and LEGO bricks for creative building and acting out scenes from Overwatch