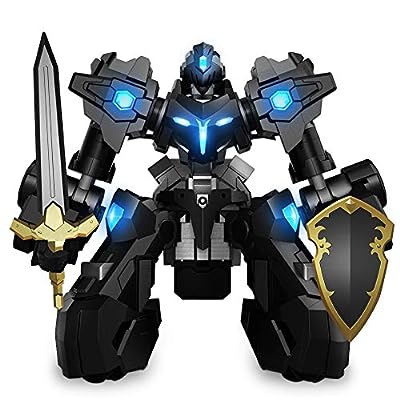 ?Man-machine synchronization?GANKER EX mirrors the player's movements accurately within milliseconds. This battle robot moves like a human via humanoid joint and motion capture technology. The design of the joystick controller is base on the structure, so it can fully and synchronously map the actions of the robot. With advanced space positioning synchronization technology and direct design, it is easy to controls the robot’s upper body, orientation, and movement. ?Precise Omni-directional Motion?This remote control robot is equipped with 4 motors Omni-directional wheels. Enabling the robot 360° high-speed movement. In order to avoid the stiffness of traditional robot actions, using 9 servo motors to achieve motion synchronous with players, continuous and fluid fast attacks. This upgraded chassis motion system enables GANKER EX to simulate human motion and calibrate the route automatically. ?Electronic Scoring System?The advanced electronic scoring system can recognize real power force and infrared shooting. The robot has a total of 7 electronic scoring points on its body. As a alarm signal, the scoring point will flash while it receives a hit. Using the damage algorithm to achieve a precise deduction. Real-time feedback of damage signals through physical vibration and lighting effects. Providing accurate HP deduction to give you a fair battle experience. ?Matched APP & Multiple Play Modes?GANKER EX APP is compatible with IOS and Android and connects to the controller by Bluetooth. This App-Connected Gaming Robot displays real-time health, battery usage, and damage information for each module of the robot, which can help the players to know their robot more directly. There are three different battle modes for players to select, duel mode, one punch mode, and training mode respectively. ?Easy Assemble & Customize?According to the separate unique design, this battle robot can be quick assembly and removal without any screw or tool. The players can assemble the robot by various armors and modification accessories. You can build your own GANKER EX. This remote control robot equipped the independent signal ports, which is built into the hands, connects directly to the robot’s power supply. Besides, you can create exclusive armors and make unique weapons.