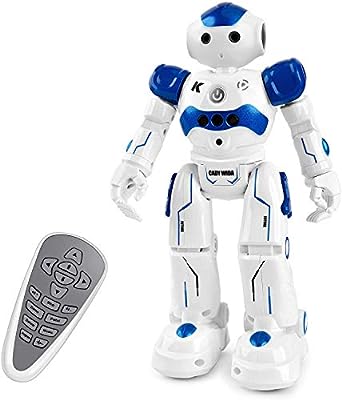 ?Smart Gesture Control Robot?-- You can use hand gestures to control this rc robot, the remote control robot can move forward, backward, turn left and turn right simply through your gestures. With its built-in sensors, this intelligent rc robot could detect and dodge incoming obstacles to avoid potential collision. ?Educational Robot?-- The remote control robot is equipped with illuminating LED eyes, fanny sounds and music. This rc robot will teach kids Popular Science, Songs and English. It’s not only a toy, but also an interesting educational tool for kids. Kids could be learning while playing. ?Singing & Dancing Robot?-- The rc robot is very entertaining as it sings a multitude of songs, dances with its own music and talk with a charming accent. There is a volume control of the smart rc robot on the wireless remote, so you can turn the volume down or increase the volume according to your needs. ?Programmable Function?The programmable kids remote control robot toy has a One-Button Programming Function that can demonstrate a set of actions that the child enters through the remote control, and can input up to 50 motion commands so that kids can play their own imagination in play. ?Christmas Gift For Kids?-- This RC robot is the best smart robot partner for your kids, which can bring much funny to kids with singing, dancing, walking, sliding and interacting. The smart remote control robot, kid's companion, to keep kids engaged and entertained.