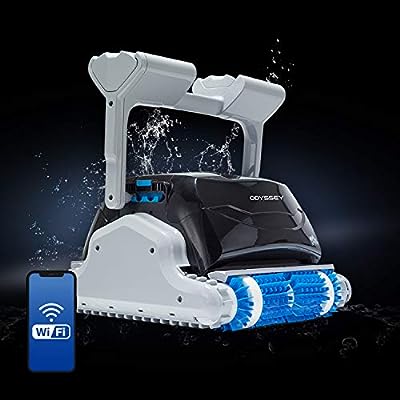 It’s the best Dolphin commercial pool robot ever made. And it’s easy to see why the new Dolphin Odyssey is the answer to the changing demands of commercial pool owners everywhere – from hotels, country clubs, spas, schools and public and swim centers worldwide. With groundbreaking gyroscope technology, commercial grade motors, and a level of efficiency never seen before, the future has already begun. The newest Dolphin features not one, not two but 3 highly efficient, commercial DC motors. It's natural to want to keep things under control. It's natural, that is, if you're the new Odyssey. Long suggested to be part of the ultimate in pool robot mobility, Gyroscopic technology is game changing. It's been called one of the greatest engineering accomplishments in the pool cleaner industry. Not surprisingly, Dolphin engineers introduced it. But you don't need to be an engineer to understand the benefits of gyroscopic control. TRIPLE HIGH RPM DC MOTORS ULTRA-EFFICIENT USING 87% LESS ENERGY Famous for a high ratio of torque to inertia, the DC motor can provide up to five time its rated torque without stalling. The Odyssey Dolphin pool cleaner for commerical pools utilizes not one, not two, but three onboard DC motors. The revolutionary 24-volt DC motors require 87% less energy than the AC motors that power old fashioned pool cleaners. Efficiency demands power. That was the principle then, and it still stands today. There’s a new mandate that guides the engineering principles of Dolphin. Conserving resources while maximizing output. That’s why the gyroscope enabled Odyssey operates on nearly 90% less power than old fashioned pressure side and suction side cleaners. While other pool cleaners can expend a massive 1800 watts of power, the Odyssey requires about 90% less energy. Odyssey’s triple 24-volt, 3000 RPM DC motors propel its dual scrubbing brushes over every square inch of the pool effortlessly. In a radical departure from ordinary cleaners, the Odyssey pool cleaner was designed to clean all pool surfaces including the tile and waterline with pinpoint precision. For the first time ever, a consumer robot is equipped with an advanced Gyroscope to deliver precise control and positioning of the robot. While other cleaners fall from the wall, the all-new gyroscope and triple 3,000 RPM DC motors allow Odyssey to remain firmly planted against the wall all the way to the top.