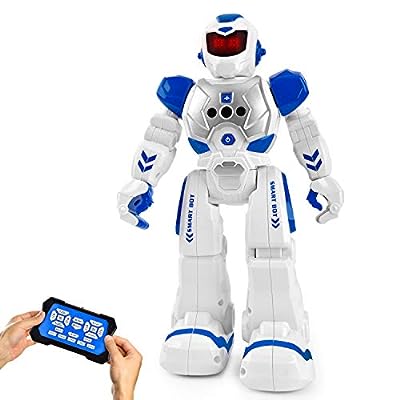 ?Remote and Hand Gestures Control Robot?You can use the remote or do hand gestures to control this smart robot,it can move forward,backward,turn left and turn right simply through your gestures.It is also equipped with a collision detection sensors that enables it to detect obstacles in front of it. The eyes light up with bright red LED'S when it moves. ?Programmable actions?This robot toy can be programmed by the remote, so you can record up to 50 moves that this remote control robot can playback using its moves record feature. ?Singing and Dancing?The robot is very entertaining as it sings a multitude of songs, dances with its own music and talk with a charming accent. There is a volume control on the wireless remote, so you can turn the volume down or increase the volume according to your needs. ?Rechargeable Robot Toy?The robot itself charges via USB instead of using batteries, charging time is about one hour, which can offer 1.5-3 hours playing time and 15-30 days in standby mode. ?Educational Functions?: The most acceptable way for kids to develop their creativity and imaginations.